Weird old Christchurch hard/sludge rock act who put out a few releases in the mid to late 90s. 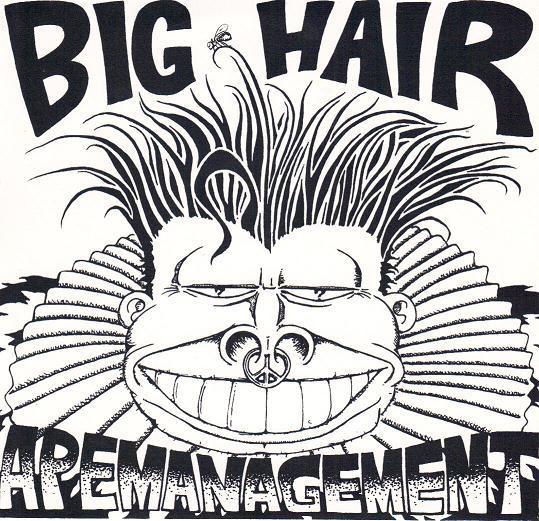 In Nov 94 they embarked on the ‘Naked and Hairy’ tour that would take them from Dunedin to Auckland via the West Coast. Shows were poorly attended in the lower South Island, and their show at the Bonsai Pizzeria in Greymouth, though played to a packed venue, incited a bout of window smashing in the local population that closed the Bonsai as a venue for bands and left the Apes with nowhere (with the exception of Gonks harvest parties) to play on the Coast.
Future tours (May ’95, August ’95, and March ’96) concentrated on Wellington, Palmerston North, and Auckland as the audiences that the Apes attracted in these centers were larger and more receptive than in their hometown, where a few sloppy performances had affected their reputation.
It was this relative success that would lead to their decision move to Wellington in 1997; A move that would be their ultimate undoing
– Dave Clark

Ape Management were a crucial player in the strong mid-90’s underground Christchurch scene, often sharing bills with the likes of Loves Ugly Children, and organizing and promoting gigs around town. bassist Brassell was a central figure in Christchurch, running the Noseflute label, and planning many events out of his Hexcentral abode / practice space. As a band, Ape Management were as loose as it could get, a raunchy rock’n’roll outfit with a noisy bent and brilliantly lurid visual style.

David Clark and Gene Pool Belmondo opted to stay behind in Christchurch when the three remaining members relocated to wellington in early 1997.
Clark had recently had a baby, and Belmondo was in the process of writing his history of NZ Punk, ‘Have you checked the children?’.
Upon arrival to Wellington the Apes recruited Alan Clark, formerly of Celtic act Banshee Reel, as bass player/manager and played as a 4-piece. Things in capital city, however, did not go as planned and when David moved to wellington in February 1998 to rejoin the band he found there was no band left to join.
– Dave Clark

One reply on “Ape Management”

“….Bonsai Pizzeria in Greymouth, though played to a packed venue, incited a bout of window smashing in the local population that closed the Bonsai as a venue…”

every time I have a coffee at the Bonsai I have to recount how it used to be a venue WAY back when. I played in a group, Voodoo Hex, and we opened for this group Ape Management. I spent the afternoon in Blackball, investigating the local flora and fauna, and arrived late for the gig, set up badly, in a room WAY more full of people than I was used to, then played really badly (which was kind of my shtick, except for occasionally when I was truly awesome), then after being utterly terrible (unlike the Penguin Club/Oamaru leg of our support tour of the south Island for ‘the management’, where we were transcendentally god like), I cut and ran with some of the local flora and fauna. I wonder if that was before the window breakings and subsequent end of live music at the Bonsai? Sounds like it, specially since you, Dave, played bass with the Hex and Mike was traveling as ‘The Managements’ bass player. I mostly abandoned the tour midway through, stayed on the coast getting my anatomy moistened by the prevailing westerly wind, drank faaar too much coffee, and managed to make another terrible opener for ‘the management’ in Nelson at a place called the Watchtower, before returning to Christchurch on what would, and rightly so, turn out to be my last gig on keyboards with Squirm as I unceremoniously, ‘you can’t fire me, I quit’, on stage at The Dux.