the solo recording alias of jane sinnott – former member of the magick heads, who released a lathe-cut single on dead dog records.
discography
picks in bold

head shy was conceived as a kind of intermediary between spotty dog and secret safari. spotty dog has been putting out various rock-oriented type things by palmerston northerners since 1994, and secret safari made its entrance into the world of noisy improv in 1998, so head shy kind of fits in the middle there as a vehicle for things that aren’t really rock but aren’t really improv either. it’s for music which experiments with sound, texture and form, but doesn’t necessarily avoid rhythm, melody or structurern- headshy
essentially a lathe-cut (peter king’s pseudo-vinyl factory, now running from a permanent base of mt. sommers – inland of ashburton) only label, distributing small numbers of varied underground releases to a small following of international collectors and enthusiasts. with connections to the unearthing underground resource and paul hirst’s fine teledu records mail-order records website, head shy’s artists (such negative eh, log store, and the superb pumice) have been gaining in momentum and exposure, from hirst’s new base of melbourne, australia.
contact details
if available

headcrash are the christchurch-based 4-piece of petra hoggarth (vocals, bass), sarah james (guitar), sean bennetts (guitar) and toby ricketts (drums). a co-ed dark rock group lead by hoggarth’s vocals and bennetts accomplished guitar, after forming in the late 90s as grope suit – the band self-released an ep before re-dubbing themselves headcrash in 2003. the group went on to release a 2nd ep, but have been playing few live shows since the name change.
discography
picks in bold

the brain-child of temperamental crazy-guy chris matthews, the headless chickens started out as a children’s hour spin-off band, and took a while before their bizarre, synth-inflected style took hold. members included matthews, johnny pierce, grant fell, michael lawry, bevan sweeney, rupert taylor and anthony nevison.
one of the most popular bands in the country during the mid 90s due to the hit laden body blow and greedyalbums, their body of work various quite markedly from start to finish. songs like ‘cruise control’ and their mammoth hit ‘george’ (which featured one-time vocalist Fiona mcdonald) had big choruses and affectionate instrumentation, whilst previously they had been a dark and quite unusual beast. mcdonald later left the band, leaving matthews to pick up the pieces, but they faded into the background as mcdonald contributed vocals to the strawpeoples eclectic debut.
discography
picks in bold

Fuzz-guitar god Chris Heazlewood had been a visible part of the New Zealand underground for at least a couple years prior to meeting Celia Mancini in Dunedin back in 1991 (and thereby forming the legendary King Loser).

In Sferic Experiment Heazlewood was loud and caustic, putting out a cassette on Bruce Russell‘s iconic XPressway label way back in 1989, flanked by future King Loser alumni Sean O’Rielly and Greg Cairns. 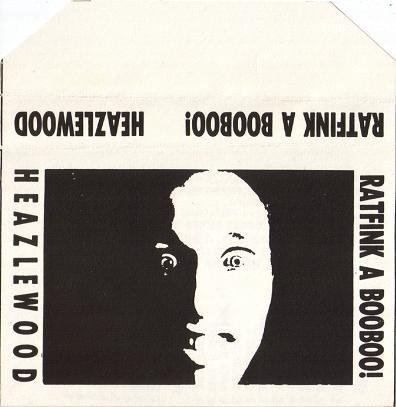 A year later Heazlewood put out his first solo release – entitled ‘Ratfink A Booboo!‘, this ultra-rare cassette release was a blueprint for future releases named after a suitably obscure 1960’s b-movie.

From 1993 through 1996 Heazlewood recorded and release four 7″ singles, and Flying Nun Records would release the combined results as ‘Ca$h Guitar‘ in 1998. By then King Loser were on permanent hiatus, and fairly soon Heazlewood would disappear from view altogether, eventually resurfacing in late 2015.

However the preceding years had been tough on Heazlewood – along with the death of good friend and former band-mate Peter Gutteridge had passed away, plus a Kickstarter page was created to help pay for his own stage four liver disease.

Heazlewood began to recover and even managed a King Loser reunion in 2016/2016, unfortunately brought to an abrupt end in mid 2017 with Celia Mancini’s passing. However circa 2017, Chris Heazlewood continues to perform in a solo capacity.

the quintessential kiwi cock-rock band of the late 70s and early 80s (while dragon were spending most of their time causing trouble across the tasman). hello sailor were graham brazier and dave mcartney at the centre, with harry lyon, tony mcmaster, graeme turner, andy macdonald, lisle kinney, richy ball and phillip mills flowing in and out of the line-up over their susequent original and reunited line-ups (they reformed to great success in the mid 80s). this is brash, over-the-top indulgent pop, kiwi-style.
discography
picks in bold