Constant Pain are the bastard offspring of legendary Auckland band Supercar.
Formed in Dunedin, they have played in such notable groups as Snapper, Figure 60, Verlaines, Renderers & Dimmer.
‘Trail of Destruction’ is a wailing Snapper’ish rock epic recorded live during one of their many anarchic live shows.
The flip, a long lost psychedelic influenced track titled ‘Million Miles’. Jump aboard the bus, as there are only 150 of these black trips going around
– Crawlspace 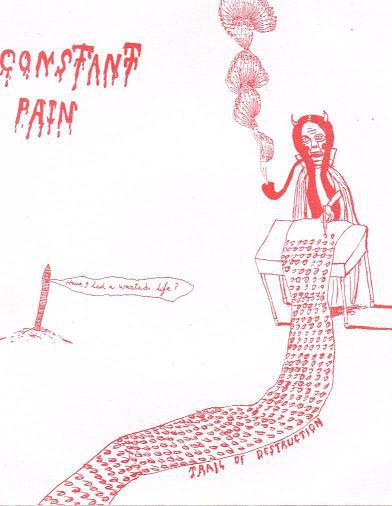 Constant Pain was Roddy Pain and Cameron Bain, an Auckland-based act by then. ‘Million Miles’ was a glorious psychedelic shiver that prompted the same spaced awe as The Thirteenth Floor Elevators’ second album version of Dylan’s ‘(It’s All Over Now) Baby Blue’. The flipside ‘Trail Of Destruction’ rattled along on a trashcan ‘Sister Ray’ riff with Nicholas Clarke drumming.