marvey king is singer-songwriter tanya horo, former singer / guitarist with auckland girl group growler and the face of new zealand’s house of travel adverts. horo has contributed vocals for australian dance act pnau, and released her debut solo lp, titled rosary through the rock-focused wildside in 2002. expect her 2nd album – due in late 2004 to be a high profile affair.
discography
picks in bold

punky glitter-rock all-girl 4-piece out of auckland. put out an album in 2000 to a lot of hoopla, but have since faded away a bit..
discography
picks in bold

spawned out of first generation punkers the scavengers, the marching girls we’re a stripped down, and more new wave focused attempt for ronnie recent, johnnie volume and des hefner. they re-recorded the ‘scavs brilliant ‘true love’, and appeared on the brilliant punk anthology ak79 (which was then expanded and reissued by flying nun in the early 90s). the marching girls relocated to sydney in the early 80s, but only managed an ep release before it was all over.
discography
picks in bold

the multi-talented greg malcolm. he’s been a member of jay clarkson’s breathing cage and suffered the fate of over-spending on their sole lp. he released an album entitled ‘trust only this face’ that lead to controversy (due a song entitled ‘the ballad of peter plumbley walker’ that was misunderstood and vilified by the media), and retreated to berlin. after engulfing himself in the german avant-garde scene, he returned to record the albums follow-up (entitled ‘what is it keith?’), returning to new zealand and starteing up his own children’s entertainment production company (call such’n’such) with his partner jenny ward.
since then he’s been pro-active leading new zealands only kletzmer surf-guitar band – surfing ussr, has recorded an album of prepared guitar instrumentals (2002’s brilliant ‘homesick for nowhere’) that encompasses a wide variety of unusual performance techniques, and has even managed to develop a new live set of down-home folk-country covers (ala johnny cash or hank williams senior).
discography
picks in bold

the following was contributed by dave swift – the drummer for mainly spaniards, and now a journalist living in the united kingdom:rnmainly spaniards formed in early 1981 from regulars among the early christchurch punk scene.
uni student richard james (vocals and guitar) wrote most of the songs. nick strong, another student, was on bass. david swift (drums), a journalist and rock music reviewer on the press, had played in the 1980 group buying a hat, while screen printer mike jeffris (guitar) played in several bedroom/rehearsal groups dating back to early 1978 and the original mollett street market punk rock scene.
mike was one of several to audition for the 4th spot in the band after months of rehearsals as a trio. ross humphries (the pin group) would have been a superb addition too but despite several rehearsals he was busy with other music projects. the name came from my own ridiculous idea of reading newspapers and circling any two words that taken out of context might work. a report on the press foreign news pages, (which i occasionally laid out and edited!) about a bus crash in spain that killed 35, ‘mainly spaniards’, did the job.
we gigged through 1981 and 1982, playing at the two pubs in central christchurch that hosted all the right names of the day. that was the db gladstone (durham st) and the star and garter (oxford terrace – demolished in the late 90s). as i recall, mainly spaniards only played once outside christchurch and that was at the empire tavern in dunedin with ballon d’essai in late 1981.
the highlight of our gigging career was most definitely two nights with the clean at the star and garter in 1982. 500 people crammed in each night and the clean, by then getting very popular, wanted us to play last. we did – and no one left before we came on….. we also supported/played with the chills, the pin group, the newtones, sneaky feelings and others.
roger shepherd, a mate of ours, had started flying nun and having seen most of our gigs offered us a single. flying nun 014 (that’s what friends are for / questions / secretaries’ lunch break) was recorded by chris knox on his famous 4-track in paul kean’s house in sydenham in march 1982 and released in the middle of that year.
500 were pressed and sold out pretty quickly and it was a mild disappointment that we did not make the national top 40. got good university radio station airplay, though, and nice words in rip it up when they did a feature on the chch scene in 1982. my rock journalism rival, rob white, was forced to give us an interview in the christchurch star in 1982 owing to our popularity in the city

The Malchicks formed in the late eighties in the Auckland guitar scene, and rose to prominence with substantial radio play for an early recording of the song ‘Vanilla’, which was eventually released on one of the bFM Freak the Sheep compilations.

Reading like a kind of second generation super-band, The Magick Heads were more of a Robert Scott (The Bats / The Clean) and Jane Sinnott vehicle than any such premise. 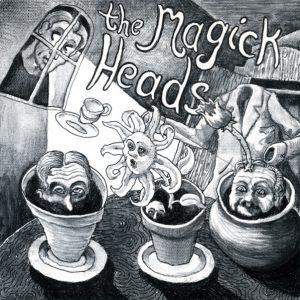 Even with both 3Ds guitarists in Dave Saunders and Dave Mitchell, The Magick Heads retained Scott’s jangly touches, with a distinct down on the farm approach.

Flanked by Jim and Richard Strang and Alan Starett, The Magick Heads we’re highly productive (Scott’s never been a slouch when it comes to writing songs), and managed the odd good tune here or there, but it all seemed a bit.. lesser than what the collective members were capable of.