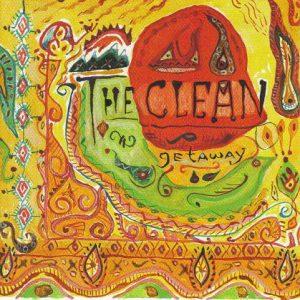 The Clean are something of an enigma to me – i’ve just caught them live on the Getaway tour and they still show the qualities that hold them in my heart as perhaps the finest live rock act i have ever seen. I’ve grown up with their music and they were an integral part of my continuing obsession and devotion to the New Zealand music scene. Getaway is only their fourth full-length album proper (along with their seminal early release album compilation) in 23 years of existence and sees the band attempting to further refine their sound.

If your familiar with The Clean’s past, you’ll know that their 80’s material was quite lo-fi and raw in its delivery. Since then they’ve managed to develop a strong jangle-rock presence through their first two albums and then exploited a more pop-centric and quirky side on the somewhat chaotic last album unknown country. The 5-year gap leading into Getaway has seen David Kilgour deliver a spate of fine singer-songwriter albums of quirky intent, brother Hamish has been keeping himself busy in New York with expatriate kiwi band Mad Scene, whilst Rob Scott has continued performing with his outstanding band The Bats.

Though maybe not as immediately grabbing as their earlier singles, the best tracks off of Getaway posses excellent melody and the natural flow that The Clean has made all their own. Album highlights like the opener ‘Stars’ and the Rob Scott-led ‘e-Motel’ show what can be done with a minimal amount of chords and perfect execution of guitar feedback. The album differs from their earlier punchy efforts, concentrating on developing strong grooves laced in reverb and echoes at a leisurely-relaxed tempo.

I think this album is more of a consolidation of the changes each of the bands three members have gone through over the past 5 years than a well-defined album. It does hold up very well as a collective piece though, as the songs (often just short vignettes of creative instrumentation, as they tried and failed somewhat on Unknown Country) posses a common laid-back and quirky vibe. Instrumental tracks like ‘Twilight Agency’ find the band experimenting with less traditional instrumentation, as each of the band members have partaken in on their other musical outlets, particularly Robert Scott’s 2000 album The Creeping Unknown, which was complemented by a great deal of lush electronic soundscapes.

Guests Ira Kaplan and Georgia Hubley (both of Yo La Tengo) lend a hand on two tracks, adding guitar and drumming contributions, without really having much of an effect on the general scope on the sound. I’d like to see The Clean produce an album that captures the somewhat ethereal magic that they produce as a live unit, as they’re still missing an album that pushes the sonorous noise-rock limits as their live show does.

The album does, however stand as an enjoyable, relaxed addition to their catalogue, but is by no means a leap forward in the style they had previously developed. As a point of note, it’s probably their most cohesive and effective of their actual full-lengths (as their albums always tend to be somewhat reunion efforts) and is a fine purchase if you’re looking for melodic rock without pretense. To get a firm reflection on what The Clean are about, i’d suggest tracking down the (compilation’ album first (or catching their amazing live show), but Getaway is still a fine purchase.