After spending a great chunk of Wildside‘s ever-depleting cash for the release of 2002’s under-selling Primary Colours, in mid 2004 Bennet and Corker left the group to pursue their own interests. Reid took the opportunity to permanently relocate to Los Angeles (where the band had been attempting to make a break) and he has since formed plans for a new session-musician based version of Rubicon. Generally pandering crap to be avoided at all costs.

Just been stuck on hold with Telecom; with the ole’ New Zealand Music Industry cranking over choons from Davey D to Lady Bic and noticed that miss runga’s new single has a certain little piano motif that sounds an awful lot like one Carol King’s uber-hit It’S Too Late Baby…. Surely that can’t be an accident?

Maybe Bic’s treading the same fine line of tribute that’s seen a bunch of television adverts imitate popular tracks recently; the Violent Femmes are a common target, NZ’s own D4 were mimicked in an Export Gold ad (remember Export Gold has apparently built an identity of being ‘The Beer To Enjoy When Seeing Live Music’, Tui is all about ‘Having A Good Laugh With Your Mates’ etc…), though it actually WAS Sir David on the Labour party ads a couple years back.

The garage rock explosion of recent times has given way to the world again discovering rock’n’roll outside the borders of the United States. After Japanese outfit Guitar Wolf got everyone pumped up all those years back, the Hives have shown that even without the hype, great rock’n’roll can sell, with their lead-off singles entering the charts worldwide backed by the truly American sounds of the White Stripes and latecomers the Strokes. Meanwhile in New Zealand, the garage rock scene has been prominent since the early 90’s. In Christchurch, bands like the Hi-Tone Destroyers, The Black Panthers and Thee Strap-Ons had already formed and released a substantial body of work before The D4 and the Datsuns (of Cambridge) had even penned a song.

But that’s just made their impact seem more explosive. In a short period of time, both bands have been trust into the limelight of the New Zealand rock scene, and have earned their reputations as New Zealand’s best live acts.

6Twenty is the fruit of the D4’s past 2 years of relentless touring. It’s a tight, punchy collection of party songs that jump out at you with more venom than the Strokes have even been able to muster. The album jumps out at with Andrew WK style song titles (luckily no reflection on the contents of the album itself) – the bustling ‘Rock’N’Roll Motherfucker’ opens at a hundred miles per hour and the pace never succumbs. Sure it’s cliched, but the d4 put in the kind of energy Iggy Pop would have been proud to front.

The second track, “Party”, rolls off with a manic agility test drum-roll before the killer bassline kicks in. The song fluctuates between twin vocalist breakdowns, and phased guitar attacks to ends the track in a true party atmosphere before their debut hit “Come On!” winds up blasting your eardrums. Another scorching bassline and confident, punchy guitar – you know you’re onto a winner with this album. Only the choice covers of the Scavengers classic “Mysterex” and the Japanese outfit guitar wolf’s “Invader Ace” break the run of great original material.

Probably best compared to the Hives, The D4 have developed an album that sounds like a pounding live performance with a thin mix of guitar and thick bass with simple but deadly drumming propelling the band to near bursting point, the way a rock’n’roll album should sound.

Both Jimmy and Dion are skilled vocalists, choosing the sing-song approach of vocal treatments, and even harmonizing to their wailing guitar sounds and each other on tracks like the dynamic “running on empty”. The album doesn’t give way to slower numbers as the white stripes have recently employed, choosing to go the hard way, but still sneaking in complimentary organ vibes on “ladies man” and “little baby”.

With 12 songs, it’s considerably lengthier than the current crop of garage albums, but the d4 pull off just about perfect the formula with almost 40 minutes of attention-seeking go-getting rock. So, catch them while you can, before the nme gets a hold of them, because they are already garnering praise for their live shows in Britain. 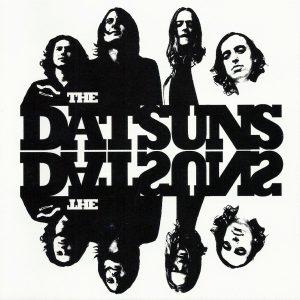 With all the hoopla and excitement over the new gee-golly-gosh retro-cool selection of rock’n’roll revivalists going on – it must be hard on the bands that have been swinging this stuff for years, right’ well, in The Datsuns case, this kind of open ended publicity and hype came at just the right time – and they’re gonna ride it out for as long as they can. There aren’t many bands coming out of Cambridge, a small rural town just outside of Hamilton, New Zealand, you see. These four lads (who have all since taken on the last name ‘Datsun’- yeah just like the Ramones) have been creating a bit of a buzz locally and then nationwide over the past 7 years or so. Inspired by the mid 90s dirty-rock scene’s of Christchurch and Auckland, they’ve been practising their best ron asherton impressions, crazy stage antics and growing their hair out just hoping something like this would come true.

Two years ago things starting going right for these small town boys. They were touring the country as headliners with (Hamilton based rockers) the D4, and even managed a low-scale invasion of Japan through their own self-funding. With a reputation as possibly the best live band that New Zealand’s ever witnessed, the group headed state-side, playing the likes of the SWSX festival and toured extensively on both sides of the atlantic for over a year – catching many an important eye. It all compounded earlier this year when BBC iconoclast John Peel recorded a session with the boys, heaping praise and basically guaranteeing them record label interest. Since then the Brit press have been going crazy for the boys, with the nme touting them as (one of their many) ‘saviours of rock’n’roll’.

Even though they may not be as revolutionary as the hype-machine would lead you to believe, these four boys (standard format: 2 guitars, bass and drummer) put on an incredible live show, and their debut full length is a direct attempt at trying to capture some of that live energy. Recorded over 2 weeks in a small studio in London, it’s a very raw recording full of over the top solo’s, tremendous sing-a-long choruses and explosive guitar riffs. Jumping out of the gate with ‘Sitting The Pretty’ things get off to a fiery start reminiscent of old Wellington band Head Like A Hole, with lead singer Dolph Datsun pulling off some deadpan vocals snares over an ever revolving, churning guitar riff. ‘Motherfucker From Hell’ then sets in, a chugga-chugga rhythm guitar anthem set to the speed of sound. The song flies at an exceptional rate with Dolph screaming like a wild-man, which happens to be very representative of their live performance.

Its pretty obvious the songs are big, loud, and stupid – but they’re performed with so much vigor it doesn’t really matter. When ‘motherfucker..’ breaks down into the typical pause for the vocal conclusion – you can’t help but scream along. Though the songs may have a ‘dumb’ quality to them, they’re nothing short of brilliantly catchy.

‘Lady’ is another anthem-like number, with one hell of a catchy chorus. Excellent rhythm work from Phil (Guitar) And Matt (Drums) really drive the song, with the band wearing their Stooges influence on their sleeve. Both ‘Harmonic Generator’ and their new leadoff single ‘In Love’ sound like Mick Ronson for the 90s. Dolph leads the chorus-heavy slower numbers with boyish backing vocals from the rest of the boys, displaying their talent for glam-styled sing-a-longs, as well. The guitar is kept simple, the drumming is primal, and the vocals are right at the front.

Of course you can’t review such a guitar-focused band without measuring up the lead guitarists performance – and Christian is one of the best rockers out there. He keeps things tight, holding rock-steady to the rhythm of each song, but at every opportune moment pulls of some of the most stunning lead breaks i’ve heard since rock originally went out of favor! Mixing equal parts MC5 and the Stooges (always keeping things clean — i’d doubt if a single effect were used in the album) it’s his powerful lead and driving rhythm that truly makes the album – no other outfit in the current crop of revivalists can match the intensity of his guitar work.

With ‘Fink For The Man’ (a local favorite and original pre-album single) Dolph manages to show he can certainly play too, with tasty opening and break down bass riffs and yet another catchy chorus. His vocals verge on exploding, showing an AC/DC influence as they strain to allow the screaming to come forth. The song builds to boiling point with tremendous performances all round – an excellent recreation of their standard showstopper.

If these guys keep performing with this kind of fire and conviction, i could imagine the world of rock being a little more pleasant to be around. They rock hard and fast and damn the stylistic similarities, because they have as much energy and explosive tendencies that even the stooges themselves showed back in their heyday.

emerging out of hamilton in the mid 90s, originally as the more pop ‘trinket’, the datsuns soon became the epitome of raucous rock’n’roll. with the release of the ‘super-gyration’ single and a strong tour ethic, the band produced a fervent fan base. quite simply in the couple of years before their overseas success, the datsuns we’re the most explosive and primarily, most in-your-face-fun band in new zealand – maybe even the world.
sure it wasn’t original, but their huge riffs, sing-shout vocals, and ‘in-with’them approach to stage presence was something to behold. eventually the band became notorious as part of the rock’n’roll revival that built up in 2002 – they had been touring the united states and britain with the same kind of enthusiasm they displayed back home when journalistic interest took hold. signing to richard branson’s virgin offshoot (and home of fellow rock’n’rollers the white stripes) v2, they become a phenomena in new zealand, selling out show after show to increasingly manic audience, and further tightening their repertoire.
the self-titled debut was unfairly over-looked by most critics, mostly due to the entire hoopla involving the revival itself. what it represented was a raw, powerful collection of pure rock songs that was far more t-rex than ac/dc, but some critics didn’t see it that way. unfortunately, as they’ve become such a spectacle now, its a little hard to relate to the human side of their live performances, as playing on a big stage to a big crowd is a little different than mucking it in with 20 or so punters down the local.
2004 saw the band release their jean-paul jones (he of led zepplin fame) manning the decks for their sophomoric release, outta sight / outta mind, recorded at jacob studios in surrey.
discography
picks in bold

Featuring a young Dion Palmer on bass (who went on to form the d4 with Jimmy Christmas), along with a couple guys named Tony Brockwell and Paul Foster, making loud, obnoxious rock’n’roll roll with a bit of a punk leaning.

They were quite popular round Auckland for a couple of years (originally forming out of Rosmini College back in 1993). They split in 1997, with Dion and Paul both exercising new interest, but sadly Tony passed away in april 1998 of cancer – a very very sad day in new zealand rock.

He was an inspired and energetic front-man, and the timing of his death (within a month of fellow auckland rock’n’roll Darcy Clay made matters all the more tragic. their album (which spawned a couple of college hits and generally did very well) can still be found here and there.