Auckland-based industrial outfit that featured a young Michael Hodgson, along with audio pruction assitance from Angus Mcnaughten (Unitone Hi-Fi). Their sole Flying Nun release was a retrospective from over a decade of multimedia performances that had seen release in extremely limited diy capacity.

Visual manipulation had always played a large part in Tinnitus performances and the early 90’s was the perfect time to explore the role of the VJ within the arts and live music scene. Over the next few years Michael provided visual enhancement for performances by the Headless Chickens, Jean Paul Satre Experience, Supergroove, Not Really Anything and many others
– Taken from Club Bizarre

In 1992 Hidgson started releasing dub remix albums under the name of Projector Mix, working with the likes of the Hallelujah Picassos, DLT and (most notably) Salmonella Dub, which would eventually led to the birth of the duo Pitchblack with Paddy Free.

This band played live only once, at The Gladstone, where there accident compilation track was recorded – a battle of the bands contest which included performances by the Expendables, Not Really Anything, among others.

A sort of transitional project for Rob Mayes, the band feature 14 songs with music written by Rob and lyrics improvised by Rick. The band followed on from a previous line up featuring Mayes, Naylor and Kitson dubiously called the Perk-U-Laters, a punk pop outfit put together by Fred Bertram, Christchurch’s self styled Malcolm MacLaren figure.

Fred managed a number of bands including Desperate Measures and The Clients and fostered Mayes song writing talents by manufacturing a band including the sneering vocals of Robert Blackmore, Mayes on guitar, Naylor on bass and Kitson on drums (also bassist with The Clients).

The Perk-U-Laters played 3 shows, the first at the illustrious star and garter where the predominantly punk audience enjoyed 5 raucous numbers including ‘Psycho Fred’, a thrashing torrid of cheek directed at manager Bertram, who was mixing the band at the time. Yelling for more the audience were informed ‘They Don’T Know Anymore’. One university gig and one Hillsborough tavern gig later and the band disbanded, dropping singer Blackmore and eventually enlisting Tindall on vocals for the pretentiously named Art And Duty.

AD featured a new batch of Mayes compositions and included a twin drummer line-up, mainly due to the band rehearsing at the clients armagh street practice room, a house owned by Naylor and then girlfriend Kirsty Lay (Face Of The Eighties’ winner). This house was a notorious punk party venue and had the good fortune to have a good selection of band gear to thrash away on, including 2 drum kits. AD performed their songs once before Mayes decided to write a whole new batch of songs with other musicians, moving on to work with the Steve Birss, and eventually into Dolphin.
– Rob Mayes 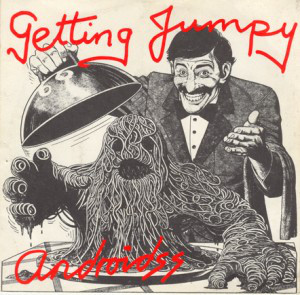 Show piece group for the writing talents of local sound engineering guru Rex Visible (real name Brett Taylor). Rex was an ex navy mechanic before he devoted his time to sound engineering, rising to prominence as the sound engineer for the Androidss, then most of the pumping bands round town.

The band went through many and varied line-up and sounds (between 1983 and 1994), the one represented on failsafe’s accident compilation featured rex visible – guitar/vocals, frankie steentjes – bass (Androidss), and occasionally robert key and david toland on drums. rex moved to auckland and worked on the live sound of bands like the headless chickens, bird nest roys and all the best sounding bands. a new auckland line-up released an ep ‘watched the world’ and an album or 2 through Flying Nun. The band never achieved the intensity of their early Christchurch performances.

The Accident compilation track ‘glow’ is taken from a live performance at the Gladstone. Headless Chickens drummer bevan sweeney joined the group and took the band in a new rythmic direction with samplers and triggers, and the bands later shows were reportedly quite good. [Rob Mayes]