Made a splash in the mid/late 90s with a pretty swell, but ultimately pretty twee debut and a less rock, more sopp follow-up. They didn’t quite have the hooks and general wacky attraction of JPS at their peak, but they’re ok. The group disappeared in 2000, but ultimately resurfaced in late 2011, with more material on the horizon.

No relation to the UK band of the same name, this one was formed in 1988 if it makes any difference. Following on from Genie and the Wild Children‘s Dave Hunt, Brett Lupton and Mark Tyler and with Paul O’Brien joining, the band became brilliantly adept at working up catch pop and indie rock numbers.

The band recorded 6 songs with Rob Mayes in the bands warehouse on 4 track yielding exceptional results, and self released minimal copies of it to friends. One track ‘Love and justice’ was included in the Pagan Records indie guitar compilation Positive Vibrations.

This batch of songs mined similar territory to the Jean-Paul Sartre Experience in their Flex EP phase, but with the Catherine Wheel’s own slanted style. Easily as good though.

Another series of recordings were completed at the same warehouse on 8 track yielding 4 more songs, none of which were released.the band also committed to tape a large part of their set at a recording session at Rob Mayes Gilby Street home but the sessions were scrapped due to difficulty with O’Brien’s drum sounds. These songs represented a wealth of cool pop songs, and most were not recorded again. Later developments in recording technology would have allowed correction of the original problem, but no use crying over spilt milk.

Catherine Wheel stumbled on to average success, the band always having trouble with live gigs, through technical difficulties, and in some cases stage fright. Eventually the band split with Lupton going on to form Squirm, Hunt went on to form Supertanker, and recorded and released material with Failsafe.

Supertanker went through a few line-up changes before folding, and Hunt eventually ended up as replacement guitarist for Christchurch grungsters Pumpkinhead. At Pumpkinhead’s demise Hunt joined David Yetton’s Stereobus project, joining after the release of the first album. Bassist Mark went on to collaborate with drummer Dave Deacon as the Sly and Robbie rhythm section of Christchurch working in Golf Course Alligators, Salmonella Dub, and 147 Swordfish, among many others.

Their debut featured a couple of very catchy singles, but was written and produced in a somewhat haphazard fashion, making for an uneven album.

Touring with the likes of guitarist Francis Hunt (The Stereo Bus) and violinist Bronwyn Robertson, they became quite a sturdy live outfit in the early 00’s, though Holmes left the band around this time.

Unfortunately their follow-up Somewhere Out There wasn’t much of an improvement, as it lacked songs with the hook of their earlier singles.

2004 saw the band with another new line-up, along with a new album (Swim Up Stream) due out before the end of the year.

New members Tom Clark (guitar) and Brignall Wood (drums) complete the new line-up, still based around the core unit of Waters and Howe.

For a band that has so much influence and family history spread across its members, Jean-Paul Sartre Experience (later shortened to JPS experience, due to legal wrangles with Sartre’s family estate) produced what could be considered a limited body of work – never living up to the expectations they had made for themselves as one of New Zealand’s best live acts during the late 80’s and early 90’s.

However ‘Love Songs’, their brilliant first album, is something of a New Zealand classic – an infectious example of quirky New Zealand guitar-pop. A varied album based around love and positively, i always find something to enjoy every time I come back to it. Jangley numbers such as ‘The Loving Grapevine’, cherished sing-a-longs like ‘I Like Rain’, and all-out fun romps such as ‘Crap-Rap’ keep me entertained, if only for the fun aspect.

After the subdued but often sparkling quirky debut, they took a very long time to release ‘The Size of Food’, which showed a change to a more rock sound. 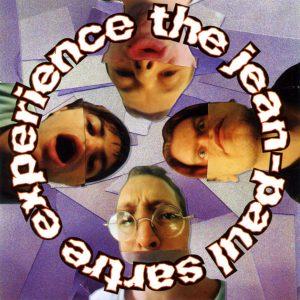 With Flying Nun reissuing a number of their long out-of-print release, it was about time the boys from Jean-Paul Sartre Experience saw the light of day again. Their early discography is as follows: they released a self-titled EP, then followed it up with a mini-album entitled Love Songs.

The Jean-Paul Sartre Experience (later shorted to JPS Experience or JPSE due to legal hassle’s with Sartre’s estate) was formed in Christchurch in the mid-80’s and immediately set about creating a suite of songs that tread the line between charmingly naive love songs (‘Let there be love’), upbeat sing-a-longs (‘I like rain’) and even kooky, disjointed attempts at white-bred rap (‘Crap-rap’).

Both blessed and cursed with all 4 members being songwriters (with Dave Mulcahy, Jim Laing and Dave Yetton all providing both guitar and vocals) their songs were fresh, invigorating and stylistically scattered in these, the early years.

Eventually the band would split after years of tightening their formula until things just weren’t fun anymore (their last album, the wildly uneven and downbeat bleeding star). Mulcahy then launched the brilliant, larger than life, and unfortunately short-lived Superette, eventually going solo. Yetton created his own ‘sissy-pop’ project – The Stereo Bus which eventually grew out of its humble solo beginnings to be a very popular 5-piece. And lastly their drummer Gary Sullivan (who often took the back stage in JPS Experience’s career) formed the acclaimed, but commercially ignored scuzz-rockers Solid Gold Hell.

Dave Yetton had a penchant for creating what he freely admitted was girly pop – soppy love songs and silly, carefree lyrics. Mulcahy acted as the ever-vigilant older brother with tracks like ‘Firetime’, adding structure to result in a perfect balance of playful melodies and sobering lyrics. Their songs were playful, yet intelligent (‘Flex’), reflective, but upbeat (‘Grey parade’) – you’d expect with such a clash of idea’s the songs would fail to gel, but luckily Jean-Paul Sartre Experience is one of those releases that exceeded all expectations.

‘Loving grapevine’ is perhaps the most perfect example of how their songs worked so well. Jim Laing’s demented, gleeful vocals are so exuberant you can’t help but think how much fun they had recording the album. A relatively straightforward pop number, the song is highlighted by cheery backing vocals – when the guitar solo strikes mid-song, it almost seems out of place.

In fact, the vocals are the most distinctive element of the album, three vocalists perusing a myriad of approaches add up to an awful lot of styles. Even the more serious numbers (‘Transatlantic love song’) seem characteristic when accompanied by such out and out fun numbers as ‘Jabberwocky’ and ‘Let there be love’.

The instrumentation is brilliantly suited though too, particularly Sullivan’s drumming which seems to drive the seriousness of the songs — the more fun and over-the-top the songs, the more disjointed and playful the rhythm. For an album with no credited bassist, their sure are some catchy grooves too – particularly the slowly building ‘Jabberwocky’. It rolls and rolls as the song grows and grows, building tension and allowing ragtime piano and guitars to float in.

Follow that up with the funky, disjointed slop-hop sing-a-long ‘Crap rap’ (trust me, it’s a lot better than it sounds) with bass that pops and grooves in an ultimately impressive fashion (considering the pedigree of these four white southern boys).

I would challenge any lover of pop to come away from this album without at least one favorite. I mean, who could resist the ever-charming ‘I like rain’ and it’s Casio-tone melody? These are the kind of songs Chris Knox would have been making if he weren’t such a crotchety old bastard. High recommended for days inside, days at the beach, days spent snuggle with loved ones, or nights spent partying.

At their peak in the mid to late 80’s, JPS Experience were considered one of the finest and most popular bands in New Zealand, along with their noisy neighbors The Headless Chickens and The Straitjacket Fitz. This album is the perfect document of the cheery, upbeat side of classic New Zealand pop, and a firm addition to Flying Nun’s current catalog of reissues.