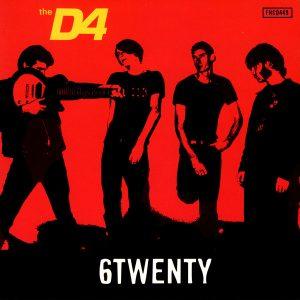 The garage rock explosion of recent times has given way to the world again discovering rock’n’roll outside the borders of the United States. After Japanese outfit Guitar Wolf got everyone pumped up all those years back, the Hives have shown that even without the hype, great rock’n’roll can sell, with their lead-off singles entering the charts worldwide backed by the truly American sounds of the White Stripes and latecomers the Strokes. Meanwhile in New Zealand, the garage rock scene has been prominent since the early 90’s. In Christchurch, bands like the Hi-Tone Destroyers, The Black Panthers and Thee Strap-Ons had already formed and released a substantial body of work before The D4 and the Datsuns (of Cambridge) had even penned a song.

But that’s just made their impact seem more explosive. In a short period of time, both bands have been trust into the limelight of the New Zealand rock scene, and have earned their reputations as New Zealand’s best live acts.

6Twenty is the fruit of the D4’s past 2 years of relentless touring. It’s a tight, punchy collection of party songs that jump out at you with more venom than the Strokes have even been able to muster. The album jumps out at with Andrew WK style song titles (luckily no reflection on the contents of the album itself) – the bustling ‘Rock’N’Roll Motherfucker’ opens at a hundred miles per hour and the pace never succumbs. Sure it’s cliched, but the d4 put in the kind of energy Iggy Pop would have been proud to front.

The second track, “Party”, rolls off with a manic agility test drum-roll before the killer bassline kicks in. The song fluctuates between twin vocalist breakdowns, and phased guitar attacks to ends the track in a true party atmosphere before their debut hit “Come On!” winds up blasting your eardrums. Another scorching bassline and confident, punchy guitar – you know you’re onto a winner with this album. Only the choice covers of the Scavengers classic “Mysterex” and the Japanese outfit guitar wolf’s “Invader Ace” break the run of great original material.

Probably best compared to the Hives, The D4 have developed an album that sounds like a pounding live performance with a thin mix of guitar and thick bass with simple but deadly drumming propelling the band to near bursting point, the way a rock’n’roll album should sound.

Both Jimmy and Dion are skilled vocalists, choosing the sing-song approach of vocal treatments, and even harmonizing to their wailing guitar sounds and each other on tracks like the dynamic “running on empty”. The album doesn’t give way to slower numbers as the white stripes have recently employed, choosing to go the hard way, but still sneaking in complimentary organ vibes on “ladies man” and “little baby”.

With 12 songs, it’s considerably lengthier than the current crop of garage albums, but the d4 pull off just about perfect the formula with almost 40 minutes of attention-seeking go-getting rock. So, catch them while you can, before the nme gets a hold of them, because they are already garnering praise for their live shows in Britain.