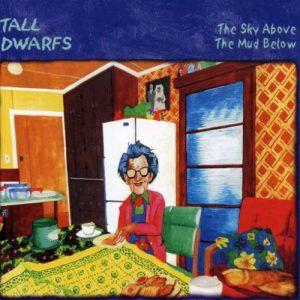 After 20 years of continually releasing dynamic, independent and thoroughly inventive music – the Tall Dwarfs have released perhaps their most laid-back and restrained full length with ‘The Sky Above, The Mud Below’, their 13th album. Wearing their influences on their sleeve, the album varies between shades of the Beatles and Beach Boys brands of pop, and the Tall Dwarfs trademark lo-fi inventiveness. For the first time, the group incorporates digital techniques (which might send some shivers down the spine of the purest of listeners – don’t worry it’s only for editing purposes!) to modify their endless collection of loops, sample snippets, tape-effects and found sounds.

The warmth of their previous recordings is still very evident, this time being far more reflective than their previous albums. Both Bathgate and Chris Knox (who has now reached the ripe old age of 50) seem at peace with themselves, and how they make music – no longer concerned with the “lost opportunities” that their other recent albums such as ’50 Flavors Of Glue’ and Knox’s solo release ‘Beat’ portrayed.

The album starts with the chirpy, upbeat tribute to the late great George Harrison “Meet The Beatle” inspired by Chris’ accidental run-in with Harrison a couple of years ago. “I know that guys like me are a drag, you must have had it up to here with fans” – a lyric typical of Knox’s content throughout the album. He’s playing for himself now, and songs like “Meet The Beatle” and the follow-up “Beached Boy” demonstrates he knows his place in the (music) world. Knox absolutely dominates the vocals on the first half of the disc, creating an introspective flow based around timid, tentative instrumentation – it’s hard to believe this is the same duo that raised so much hell as The Enemy back in the late 70’s.

“Room To Breathe” again recalls long lost beatles numbers, with Bathgate’s first vocal outing sharing a great deal of character with long lost Lennon classics. As the understated (and undervalued) member of the duo – Bathgate has a great deal of talent for playful melodies that goes unrecognized. “Melancholy” sees Knox bring out the oven trays (for percussive effect) along with some gentle wilting Mellotron from Bathgate – a sickly sweet ditty that’s already burnt its impression on my brain – imminently hummable.

Bathgate’s given the job of pulling off the album’s one true radio hit, though, with the self-effacing sing-a-long “Baby, It’s Over”, featuring some of the best organ and synth the Tall Dwarfs have ever committed to tape. Similar to the catchy (and somewhat revolting) singles from last album ’50 Flavors Of Glue’, it’d be a surefire hit if only pop songs were judged on merit rather than marketing ability!

“You Want Me Shimmy” is the prime moment of humor on the album, Knox trying his hardest to pull off an allman brothers impression, but comes off somewhere between captain Beefheart and Tom Waits! Definitely the result of many whiskey soaked nights behind the mixing board, it serves as a great foil to the more serious songs on the album.

The album concludes with an additional 8 tracks (described on the cd as a free EP) under the ‘International Tall Dwarfs’ moniker to coincide with material collected from international fans, called The Weidenhausen Impediment. The EP features Graeme Downes guitar work, a loop from Jad Fair (of Yo La Tengo), vocals, clarinet and guitar from Jeff Magnum and Laura Carter Of Neutral Milk Hotel (and Elf Power) and instrumentation from the entire Clean crew, along with a loop from unknown Dutch band ‘Mongrell’. Following on from the International Tall Dwarfs stunning debut ‘Stumpy’ — considered by many as the Dwarfs best album.

It’s quite evident that digital recording hasn’t made too much of a difference to the way the boys make music, the album still showcases the Dwarf’s disdain for flashy production – and it takes until the trailing EP before their trademark tape manipulation comes into play. all in all though, the many guest stars (and occasional stolen sample byte) blend perfectly into the dwarfs lo-fi madness – with even the guests from neutral milk hotel being relegated to merely impersonating possums on ‘possum born’. one of the best albums of the year so far, filled to the brim with catchy sing-a-long choruses, strange lyrical bents and references.