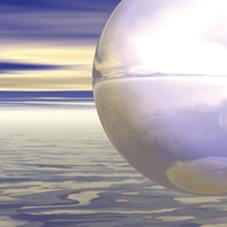 You ever play Q-Bert? How about Paper-Boy? Ever seen the hilarious end sequence from the Monkey Island games? I tell you what; Disasteradio! (affectionately known as D-Rad by his friends and Luke Rowell by his mum) has. In fact hes just the kind of guy to shed a thousand expletives while describing the shear power of the Fairlight keyboard system, while flying through another round of your favorite 1980s videogame. His songs are a mix of upbeat, bleepy keyboard pieces in the style of old-school video-games, and some damn funky beats making quite a favorite on the dance-floor.

In fact D-Rad has been a bit of a super-star in the A Low Hum-centered New Zealand music underground for the past few years, and hes been continually promising the release of his first Real album (after 3 self-produced CD-R releases – all now available for free via The Internet Archive) for a while now, so its great to see Blink get this to us after previously dealings with Wellington label Capital Recordings never eventuated. Visions feels like the cumulative history of his songs; pretty much how they appear these days in his genius live shows.

His songs have grown in stature, production and even managed to become more poppy and addictive. Opener Awesome Feelings (one of the many highlights from Real Groove Magazines recent New Sound compilation) is a case in point. That familiar-to-live-show-veterans opening synth line is now followed by typical D-Rad vocoded lyricisms: 1-2-3 gone have some fun, were feeling awesome coz the day is done / Living in a city thats full of squares / but we are awesome and we dont care hes an enthusiastic, positive guy.

Another obvious highlight – Hotline has been a choice little number for a couple years now. Like the best hits from Man-Machine era Kraftwerk he portrays himself as a robot just out to have some fun, and what makes more sense than an ode to the automated Telephone Exchange System? In fact Kraftwerk is a pretty firm influence on D-Rads sound; with shuffling metallic rhythm (the long-running influential German group are quite obsessed with Trains) and genuinely retro keyboard bleeps.

However, Disasteradio! is no one-trick pony. Take Back the Rave brings things forward another decade or so to the early 90s euro-rave sound, with a funky rhythm and a choice mid-song breakdown. Digital Pop marks the first appearance of Lukes vocals sans computer-vocoding (i keep thinking of Trans-Am circa Red Line), Stairdancer sounds like a mash-up of new-wave bands (with a pounding beat and swift synth line) whilst Believe in Yourself has a moody intro and ominous melody, like the soundtrack to some overcome-the-odds-type movie (and another killer breakdown thats also dead-funny).

Disasteradio! makes music for pop-music fans who like to have a little fun. Its all very positive, upbeat stuff, harkening back to younger days and whatnot, plus it makes for fine dance-floor-banger material. Great to see this finally get a full release I know Ive been looking forward to it immensely and I reckon the time spent fine-tuning and developing this mini pop-orchestras has been well worth it. A fine album.

Bizarre Auckland synth and vocal duo (Chris Cudby and Daif King) who play a gritty, distorted and, err, wiggly take on drone-pop. I had an unfortunate habit of missing each of their sets on a recent excursion up north, caught between being witness to the Shocking Pinks shedding members during their Eden’s Bar show, and rushing to see Sonic Youth as the duo busked outside. But i did pick up their debut cd-r, a rambling and chaotic mix of blurred vocals, white noise and…. catchy melodies! All recorded in sub-atomic ultra-lo-fi goodness and packaged in unique sleeves. Made for a positively jolly ride to the airport, surrounded by a bus full of chart-pop fan swedes.

As A Low Hum‘s Blink will attest (one of their first releases graced the 2nd edition of his excellent fanzine), there’s something magnetic about their Casio-tone driven grind and junk-shop music mentality. Kinda like if the Tall Dwarfs indulged in a little more La Monte Young action (huge distorted walls of droning lo-fi – in their case in keyboard form) while wearing live squid strapped onto their faces. warped.

Late in 2004 the duo finally made it south, touring as part of the A Low Hum collective, this time carting CD-r’s of Hypercolours – their third release, an album-lengthed EP. Its bit more cohesive and full-formed than the debut, its a pretty twisted, but enjoyable sunday afternoon headphone piece.