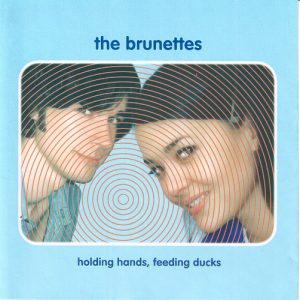 Sunny pop, sing-along melodies, and carefree grooves. Not something that pops up too often in New Zealand music, but The Brunettes pull it off with a slick, diverse album that I can imagine being a beach-party favorite this year (note to the American readers: it’s coming into summer in the southern hemisphere).

The Brunettes are a chirpy four-piece that’s sprung out of the Auckland rock’n’roll scene over the past couple of years, but would probably list the Grease soundtrack as a stronger influence than the MC5, unlike their hard-rocking compatriots The Datsuns and The Rock’n’Roll Machine. This is Belle And Sebastian for Phil Spector fans, classic hummable songs with the odd flourish of string orchestration (the title track), 60’s references (the utterly charming ‘Summer Love’) and exotica-styled percussion (marimba, etc.) throughout the album.

Boy / girl vocals add to the ‘Summer Love’ theme of the album with Heather sporting a smooth, girlish eloquence, whilst Jonathan could even be compared to slacker types – opening track ‘The Moon And June Stuff’ noting “..it’s no secret / that when I sing, I like to sound American” in a typically dismissive context. A remarkably accomplished sounding album recorded on a shoestring budget, the songs flow together majestically, guided by Heather’s tasty flashes of glockenspiel and Karl’s quirky, rolling percussion.

How apt that the album was picked up by capitol records, then. ‘Holding Hands, Feeding Ducks’ and its delightful, inquisitive double bass could be mistaken as a late 60’s Beach Boys recording. ‘Dancefloor’ even manages to squeeze in a couple of “Scooby-Dooby-Doo” and grease styled “Didi-Didi-Dit” vocal accompaniment – absolute ear candy for the young at heart. Later, ‘Super Eight’ builds a crescendo of violin and cello in the song’s climax, showcasing the bands smooth and almost opulent production flourishes.

Towards the end of the album, whilst still sticking to rather upbeat and kitsch musical backing, ‘End Of The Century’ is a darker, reflective love song featuring some tasty Spanish guitar and Jonathan’s strongest vocal performance. Pre-release single ‘Cotton Candy’ has Heather singing over fuzzy guitar, violins and piano and breaks from the kitsch feel of the rest of the album (especially during the rumbling, building ending). ‘Tell her’ though, is the most appropriate ending, a short, contemplative pet sounds like send-off with interlocking vocal harmonies and the obligatory spoken word breakdown very reminiscent of the best 60’s girl groups. Overall it is a fine ending to a fine album.

A truly fun soundtrack to many a summer getaway, holding hands, feeding ducks has come out of nowhere as a delightful album that should rightfully establish the Brunettes as one of New Zealand’s most promising pop outfits. At the very least, it’s a nice break from the electro-mad songs that glut the current charts.